Imagine an agile herd of gazelles peacefully grazing on open plains, bowing their heads while they carefully nibble the foliage from under their feet. Their careful, meticulous movements and strength in numbers can mean they go unnoticed by predators. When suddenly, one springs from the herd, catapulting itself upwards, leaping gracefully with all four feet raised above the plains. This action, although remarkable, has now caught the attention of, and left them vulnerable to predators.

This is often an analogy that has been used to describe activism. People are breaking away from the herd, refusing to go along with events, situations and issues that they don’t agree with and making themselves known. Often, this means they’re exposed to others who do not share the same views and so, many activists will come under the watchful eye of scrutiny – much like a leaping gazelle who is being stalked by a lion.

While the ‘predators’ in this analogy see street marches, protests and boycotts as a waste of time and valuable resources, the gazelles (activists) are truly making a difference to, not only our lives, but the lives of future generations. Regardless of whether you’re a part of the feminist movement or wanting to raise awareness to the devastating effects of climate change, activism can open up and present us with a whole host of valuable and life-changing opportunities. Without passionate activists lifting the lid on the issues of today, the modern world would be a bleak place.

From the Black Lives Matter movement, to fighting for the rights of the LGBTQ community, activism has played an integral part in today’s society, and often, there are incredibly inspirational, selfless people behind each and every movement. These activists vary in age, gender and backgrounds – from school children concerned about climate change to huge celebrities, such as Terry Crews fighting for women’s rights – sometimes it only takes one person to make a difference in the world.

American actor, comedian, author, artist, NFL football player and activist, Terry Crews is an advocate for women’s rights and activism against sexism. He recently went public about the violence and abuse his family had suffered at the hands of his aggressive father. Eventually, he was named as Time Magazine’s Person of the Year in 2017, for sharing his stories of sexual assault with the general public and was named as a ‘Silence Breaker’, a title appointed to those who have experienced sexual harassment or sexual assault, by the Me Too movement – something Crews is very much involved with.

Crews has talked openly about his experience as a survivor of sexual assault. He has described the events that occurred in 2016, when he was physically groped by a former head of a talent company. Despite Crews filing a suit against the perpetrator in December that year, prosecutors decided not to press any charges.

Crews described the event as an “out of body experience” which caused him to feel complete “helplessness”. Paying expensive trial fees had nearly financially crippled him, even as a wealthy, renowned actor. His experience of sexual assault, along with a failed court pursual, spurred Crews on to join the Me Too movement. He was one of a few men to come forward and publicly share his story.

Crews is also a supporter of women’s rights, drawing on the violence he experienced during his childhood. Speaking about the trauma of growing up with a domineering mother and an aggressive, abusive father who was wholly dependent on alcohol. Crews admitted that eventually, his father began influencing his own behaviour, making him “part of a complicit system”.

Crews continually saw his mother being assaulted, prompting him to try and protect her. This is when traits of his father’s toxic masculinity began to rub off, thus giving Crews the strength and determination to banish feelings of anger, aggression and negativity from his mind, claiming that “you choose who you are, but the only way you learn is through imitation”.

Since his sexual assault, Crews continues to be involved with the Me Too movement, in order to reduce and eventually, put a stop to the negative impact of toxic masculinity. This has helped many people around the world who are struggling with traumatic, violent pasts or who have become a victim of sexual assault. Crews believes it helps, not only him but other people who have experienced similar situations, to be open and talk about personal events. “This is my therapy session”, Crews said.

Scottish television presenter, actor and former model, Gail porter is a much loved personality on British television. Starting her career in children’s TV, she quickly became one of the most popular celebrities during the turn of the century. However, in 2005, Porter developed alopecia totalis, causing her to lose her hair. In order to raise awareness of the condition, she decided that she wouldn’t wear a wig. This resulted in her soon becoming an ambassador for the Little Princess Trust, a charity which supplies wigs to children who have lost their hair.

By 2006, her condition began to improve, showing positive signs of hair regrowth, stating in April the same year that “it is possible that I’m going to get my hair back”. However, by the end of 2010, and despite three-quarters of her hair growing back, it had started to fall out again, leaving her irreversibly bald.

Her condition sparked a BBC documentary to be made; Gail Porter Laid Bare, airing in May 2006, whereby Porter spoke openly about her battle with alopecia, along with how it made her feel. This ignited Porter’s passion for the promotion of body positivity, helping other people of all ages and genders to feel comfortable in their own skin – regardless of what anyone else might think of them.

She has a particular soft spot for the younger generation, as in 2009, she appeared at the Comedy Store for the Laughing Project event. This was all in support of the youth homelessness charity, Centrepoint.

Porter, refusing to wear a wig to hide her alopecia, is a champion for body positivity. Her engaging, humorous talks injects confidence and empowerment into those who suffer with body confidence, regardless of age or gender. An authentic, powerful speaker, Porter talks openly about many issues in her life, including living with bipolar disorder. She’s made a huge impact on people’s lives, purely through exposing her vulnerabilities to the world and showing everyone that actually, they’re beautiful.

After graduating from the University of Sussex with a degree in English Literature, Selene Nelson – journalist, author and food activist -started her career writing articles about food and travel for popular magazine and newspaper publications, including: Town and Country, The Sunday Times Travel, Food Republic and SUITCASE Magazine. She is now a renowned journalist and activist with an unfathomable amount of supporters who are loyally following Nelson as she embarks on her food and animal activism journey.

Nelson turned to Veganism in 2017, after being made aware of the horrors of animal agriculture. In the summer of 2019, Nelson spoke at one of our monthly Breakfast Clubs where she talked openly about how animal activism can increase the number of people who will switch to plant-based food alternatives.

However, Nelson believes that animal activism alone won’t be enough to inspire people to make different choices when it comes to buying and eating food. According to her, Veganism combines and highlights three major issues in today’s society: health, the environment and the Ethical Treatment of Animals. All three of these issues can be attributed to food activism and with the help of social media, Nelson is hoping to catapult the movement into the spotlight.

With Nelson looking to inspire as many people as possible worldwide, she believes that “when it comes to food activism, you cannot downplay the importance of social media”. During her speech at the Kruger Cowne monthly Breakfast Club, Nelson predicted that Veganism is “set to rise by 327%” by 2020, and this will largely be down to social media being “used as a way to connect with other people”, thus acting as “a powerful tool for driving change”.

With approximately 3.2 million people (equating to roughly 42% of the world’s population) using social media today, it comes as no surprise that Nelson is preparing to use the power of the internet to further support her cause, helping to inspire others to transition their diets to one which is more plant-based.

A young climate change activist looking to make a difference

Greta Thunberg is a 16 year old climate change activist from Stockholm, Sweden. She recently received media attention after attending the UN Climate Action Summit in New York City. Greta, along with her father, Svante Thunberg famously sailed across the Atlantic Ocean to the USA in a sailboat in a bid to reduce the amount they travelled by aeroplane.

Thunberg went on to deliver an incredibly emotional speech about the devastating impacts climate change has had on the world thus far. This subsequently earned her an exceptional amount of new supporters who are happy to implement the changes required to make a change to the world of, not only today, but the future as well.

The importance of activism

Activism, no matter what it’s used for, is commonplace within our society and slowly, people are starting to embrace it. By supporting others who are fighting for a good cause, or to raise awareness to those who would otherwise be oblivious to certain issues and situations, we too can make a difference.

We don’t have to be famous to make an impact. Regardless of your gender, sexual orientation, age or background, we all have the power and potential to be activists for something we’re passionate about. Whether it be the endangerment of blue whales, many of which are still being hunted, or the uncertainty of Brexit, we’re all able to leap away from conformity, much like a gazelle on the savannas of Africa.

Kruger Cowne are proud to be representing a whole host of public and inspirational speakers, including Terry Crews and Gail Porter. With an extensive range of speakers to choose from, including environment and green issues speakers, diversity and inclusion speakers, social issues and humanitarian speakers and news, world affairs and political speakers, you’ll easily be able to motivate and inspire your enthusiastic audience. To find the most ideal influential speaker for your event, get in touch with a member of our friendly, knowledgeable team today – we’re always happy to help. 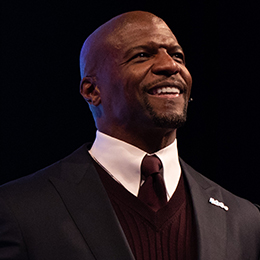 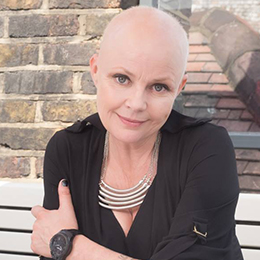