Born in 1951, Sir Bob Geldof is one of Ireland’s most successful exports and is known throughout the world for his many talents and passions. Starting his career as a successful musician, actor and songwriter, he has gone on to both inspire a generation and make prolific social changes as a philanthropist and political activist. An inspiring and influential public speaker, he speaks on a range of topics and uses his vast personal experiences to both provoke and motivate his audience.

Shooting to fame as the lead singer of the Boomtown Rats, Bob Geldof was a major player in the 70s punk rock movement and enjoyed over a decade of hits between 1975 and 1986, including “Rat Trap”, “I Don’t Like Mondays” and “Up All Night”. After leaving the band, he launched a successful solo career, published his best-selling autobiography, “Is That It?” and worked as a radio DJ, journalist and television presenter.

In 1984 Geldof was watching the news one night when he was horrified by a report on the famine in Ethiopia. As we all now know he got on the phone. The result was the all-star band aid and the song he co-wrote with Midge Ure – “Do They Know it’s Christmas?”, which went on to sell over three million copies and become the biggest selling song in the UK. He subsequently inspired and joined the American response – “We are the World” the biggest-selling single in the world. Six months later, on July 13, 1985, came Live Aid – “the biggest and greatest event in pop history”. $200 million was raised for the starving and the dying in Ethiopia. Geldof established and continues to be the chairman of the Band Aid trust, which operates in eight African countries.

Following a further two decades of determined charity work and activism, Geldof went on to organise the Live 8 concerts. Part of the Make Poverty History campaign, the Live 8 project consisted of 6 concerts across the world and aimed to raise awareness of the plight in Africa, including poverty, hunger, government debt and the AIDs epidemic.

Geldof has made 7 albums as a solo artist alongside the 7 Boomtown Rats albums, written 2 best-selling books and several award-winning TV documentaries including “The Real Love That Dare Not Speak Its Name”, a film about fathers and their children.

Geldof currently serves as an adviser to the One Campaign, co-founded by fellow Irish rock singer and activist Bono, and was a member of the Africa Progress Panel. He was a member of prime minister Blair’s Commission For Africa and is currently Founder and Chair of the 8 Miles private equity fund for investment in Africa.

Bob Geldof has been nominated for the Nobel Peace Prize 8 times, more than any living nominee, and was honoured with a knighthood by HM Queen Elizabeth II; received the Nobel Man of Peace award from Mikhail Gorbachev; was awarded The North-South human rights award in Portugal; and awarded the medal of Chevalier de l’Ordre des Arts et des Lettres in France.

Having reformed The Boomtown Rats they now have their first studio album since 1984 Citizens of Boomtown; a massive documentary about Bob and the history of the Rats and a new book Tales of Boomtown Glory was published in March 2020 – an anthology of the complete lyrics from Bob Geldof’s Boomtown Rats and solo albums, interwoven with Geldof’s witty, deeply felt and frank commentaries of the background, inspiration and context behind some of his songs.

Of himself, Bob says he is – a musician. 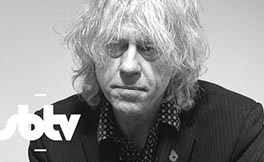 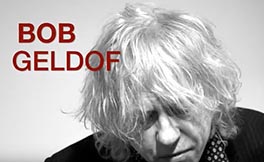 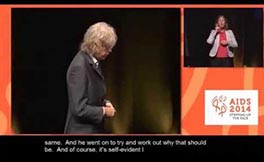 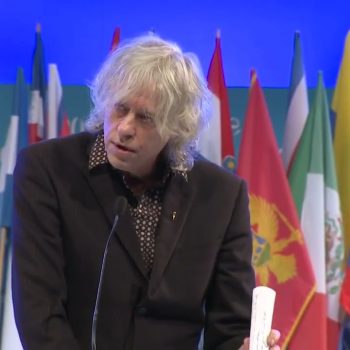 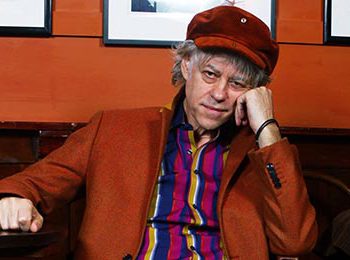 "What an incredible speech! He [Bob Geldof] really is the best orator I have ever seen.”

"Just a quick note to say thanks to you and your team for your help in getting Bob to speak at the Google conference earlier this week."

"Bob [Geldof] really did an amazing job of tailoring the talk to this audience and I imagine that's a part of the magic that he delivers every time (and how great was that when he showed the audience yesterday's Toronto Mail). As I mentioned, it's really a pleasure when a very intelligent person speaks to an audience as if they're on his level. That's not often the norm and it's refreshing. Also, I could be wrong but it seemed to me that he enjoyed challenging himself to create at least part of this talk without a net and on the fly. It was great to see him create it."

"We ask our delegates to complete evaluation forms on the speakers etc. Bob received the best marks in the history of our event (higher than Bill Clinton!). The top mark is 5 but people were crossing that out and putting a 6 or even a 10! Great message , great delivery , fully deserved his standing ovation ! Thanks to you for making sure it worked and to Bob for taking time out from G8. Awesome!"

"An outstanding speaker. The most powerful messaging I have ever heard."

"Barry and I have seen hundreds of speakers over our years in the Industry and both agree Sir Bob [Geldof] is the best!"