In 1999, actor and filmmaker Jeremy Gilley founded Peace One Day, a non-profit project with a view to establishing one day a year where every warring nation around the world would lay down their arms in unison. On 21st September the same year, Gilley, along with several hundred supporters, gathered at the Shakespeare’s Globe Theatre in London to celebrate the launch of Peace Day.

By this time, the campaign hadn’t yet received the publicity it needed in order to become nationally or globally recognised. Having read a book by nuclear physicist Frank Barnaby, Gilley concluded that the media had to fan the flames of peace. According to Barnaby, the media has a responsibility to catapult campaigns such as, into the public spotlight. As a result, Gilley took necessary steps to ensure the global recognition of Peace Day shortly thereafter.

Gilley believed that if the world united interculturally, it may well be the key to the survival of humanity. It would shift the level of consciousness that surrounds the fundamental issues humanity continues to face. Frustratingly, Gilley didn’t have the financial backing to take the campaign around the globe, and so started sending letters to people who had the potential to change the course of the project.

Eventually, and to his surprise, Gilley received a reply from the Dalai Lama who stated that the campaign for Peace Day “is an amazing thing” and subsequently asked Gilley to visit him to discuss the project in greater detail. This proved to be highly advantageous for the campaign, as Mary Robinson, former president of Ireland, stated that “this is an idea whose time has come”.

Having received a great deal of support from well-respected professionals across many sectors and industries, the Peace One Day project had finally been recognised by the UN. On 7th September 2001, Gilley was invited to New York City where the Costa Rican and British governments had put the idea forward to the UN General Assembly, of the first ever ceasefire non-violence day, with the 21st September as the fixed calendar date. This was then unanimously adopted by every head of state in the world.

The 21st September is personally significant to Gilley, as twenty-one was the favourite number of his grandfather, who was once a prisoner of war during World War II. Whilst enlisted, Gilley’s grandfather witnessed a bomb exploding at Nagasaki, which subsequently, and very slowly, poisoned his blood. Of the seven hundred men who left that day, only twenty-three of them returned. A further two died on the boat leaving twenty-one survivors, hence twenty-one becoming Gilley’s grandfather’s favourite number.

The Peace Day campaign soon gathered considerable momentum. Kofi Annan, a Ghanaian diplomat who served as the Secretary-General of the UN from 1997-2006, invited Gilley to come to New York on the morning of the 11th September 2001. This event was created with the sole aim of announcing the Peace Day date to the world, ensuring thousands of people had knowledge of the newly established day. However, due to the tragic events that occurred that day, the announcement was never made.

Although shaken by the events in New York that morning, Gilley left the city feeling somewhat motivated, determined to stop events such as 9/11 from ever occurring again. He believed that if Peace Day was recognised worldwide, then this vision would become a reality.

Over several years, Gilley had continued to attend meetings with the UN which further grew and strengthened the support which was shown towards the Peace One Day project. Eventually, he teamed up with actor Jude Law, who flew to Afghanistan with Gilley to spread the Peace One Day message. This visit gained huge press and media attention, resulting in the cooperation and support of millions of people.

Upon their return to the UK, Gilley was presented with a letter from the Taliban, stating that Peace Day had been recognised by them and for the 21st September, they would lay down their weapons and allow humanitarian workers into war zones to administer medicine and healthcare to those who desperately needed it. 1.6 million children were then vaccinated against Polio as a consequence of ceasefire.

By September 2008, the ISAF announced that it will not conduct offensive military operations on the 21st September. As a result of those conforming to the conditions of Peace Day, the UN Deputy of Security and Safety notified Gilley that the rates of violence had subsequently reduced in Afghanistan by 70% – Gilley was thrilled.

The Peace One Day campaign continued to grow in popularity. In 2016, analysis was carried out by Mckinsey and Co, an international management consultant, which revealed that awareness of the project had reached up to 2.2 billion people, equating to 30% of the world’s population. Consequently, of those 2.2 billion people, 21 million actively behaved in a more peaceful way. Gilley aims to increase the campaign’s awareness to 3 billion people, eventually.

As we grow ever-closer to celebrating 20 years of the Peace One Day campaign, Gilley now has numerous resources residing in 174 countries across the globe. He is now using social media as a way to reach out to the younger generation, in a bid to increase awareness even further and spread peace throughout the world.

“There is a possibility that our world could unite, that we could come together as one…by working together, we can create peace one day”. – Jeremy Gilley, 2011

Kruger Cowne are proud to be representing a considerable number of social issues and humanitarian speakers, including the world renowned Jeremy Gilley. With an impressively vast range of speakers to choose from, you’ll be able to attract, inspire and motivate new and attentive audiences. If you’d like to find the right influential speaker for your event, get in touch with us today – our friendly and knowledgeable team will be happy to help. 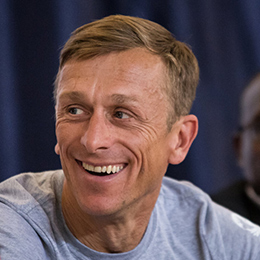