The latest in 19 generations of the Spencer Family to live at Althorp House, Charles Spencer is the guardian of over 500 years of the ﬁnest art, priceless antiques, and the memories of his ancestors including the late Princess of Wales.

Charles Spencer, or Viscount Althorp as he was styled growing up, became the 9th Earl at the age of 27 on the tragic death of his father in 1992.

Educated at Eton, he went on to study History at Magdelen College Oxford. A career as a TV correspondent shaped his presenting skills.

A proliﬁc author, he has written multiple bestselling history books.

One of the twentieth century’s most famous orators, Charles Spencer has a unique perspective to share. The 18th generation of what was once England’s richest family, he now presides over 13,000 acres of private land and a house that dates to 1508.

Charles Spencer is no stranger to the complex moral and legal obligations that come with managing wealth across generations. Careful succession planning has been instilled into him by his father, and his father before him.

Charles Spencer eloquently describes how the rise and fall of the Spencer family finances, has left him with insights that are increasingly relevant for modern times.

Charles Spencer inherited Althorp at the age of 27, a legacy that came with 13,000 acres of land, a 100,000 square foot stately home, ninety rooms, eighty-eight fireplaces and six hundred and fifty precious paintings.

In the collection at Althorp are works by some of the finest artists in history, with George Stubbs, Thomas Gainsborough, Sir Joshua Reynolds and Sir Anthony van Dyck hanging in the State Rooms. Important furniture includes pieces by John Vardy, Thomas Gilpin, James ‘Athenian’ Stuart, Claude-Charles Saunier and Adam Weisweiler. Althorp House is one of the most significant stately homes in England, and the responsibility for the estate and its treasures fall to Charles Spencer.

Charles Spencer is a passionate presenter on topics that span history, conservation, art collecting and curation. 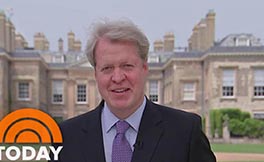 Thank you! You were absolutely heroic. To say that you charmed everyone is a great understatement. I was so thrilled to see how enthusiastic the students were!

You made a magical evening even more special, and the feedback I had about your presentation was fantastic.

Alison Weir, organizer of tours of England for HNW Americans, after speech at Leeds Castle, 2015.

Your talk last night was, truly, one of the very best I have ever seen or heard given by an author--authoritative, engaging, fluid, making history come alive. I would gladly hear it many times over.