A highly versatile artist, Cher is an American singer and actress who started her amazing career as one half of Sonny and Cher in the 1960s. Cher has since reached international fame with an array of top 10 hits and screen roles as well as winning an Oscar for her lead role in Moonstruck.

Born in El Centro, California, Cher rose to stardom as part of a singing act with Sonny Bono in the 1960s, hitting No. 1 with the single ‘I Got You Babe’. Yet she soon established a successful solo career of her own as well, having chart-toppers including ‘Gypsies, Tramps and Thieves’, ‘Half-Breed’ and ‘Dark Lady’.

Cher began her acting career in the 1980s, starring in films like Silkwood (1983), Mask (1985), Suspect (1987), and The Witches of Eastwick (1987). Following her widely acclaimed performance in the movie classic Moonstruck, released in 1987, Cher won her first Academy Award for Best Actress.

With her attention now back on music, the ‘80s and early ‘90s saw Cher showing off her rock tracks with albums such as ‘Cher’ and ‘Heart of Stone’, the latter of which contained the top ten hits ‘If I Could Turn Back Time’ and ‘Just Like Jesse James’. She scored another top 40 hit with her mainstream pop cover of ‘The Shoop Shoop Song (It’s in His Kiss)’, off the soundtrack for Mermaids. Yet it was her 1998 album Believe that not only placed the singer firmly in dance/electronica territory, but also inspired an enduring trend of music producers relying on vocoders and even earned a Grammy for best dance recording.

In 2003, NBC aired one of Cher’s live performances as Cher: ‘The Farewell Tour’. The program was nominated for six 2003 Emmy Awards and won three, including: ‘Outstanding variety, music or comedy special’; ‘Outstanding camerawork, video for a miniseries, movie or a special’; and ‘Outstanding costumes for a variety or music program’.

Despite previously announcing plans to retire from live performances, Cher returned to the stage with her Las Vegas show entitled Cher at the Colosseum at Caesars Palace in 2008, and had performed 192 shows by the end of the series, in 2011. She also released Closer to the Truth in September 2013 and and Dancing Queen in 2018.

Cher speaks passionately on subjects ranging from ecological issues to gender discrimination to protection of species to using social media for campaigning (Cher has just under 4,000,000 Twitter followers herself).

Cher is internationally recognised as a leading authority on animal welfare, humanitarian issues, women’s rights, LBGT issues, inclusion and US politics. She is an excellent presenter and speaks on leadership, motivation, women’s rights, politics, health and her own hugely fascinating life. 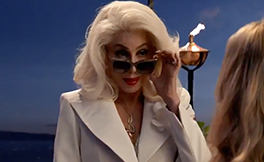