Christo Brand is a South African former prison guard who along with a select few, had the responsibility of guarding Nelson Mandela during his incarceration on Robben Island, in 1978, aged 19. In 1982 Christo was transferred along with Mandela to Pollsmoor Prison. Christo and Mandela developed a close friendship over the course of many years.

As a young man growing up in Stanford Christo made the decision to join the prison service rather than partake in National Service in the army, which at the time was compulsory for every South African white male. Once Christo had completed a year of training in Kroonstad, he applied for a post on Robben Island to be closer to home.

With his application successful, Christo was sent to work on Robben Island and that was when Christo first came across a 60-year-old Nelson Mandela. Here they formed a relationship and a close friendship, built on trust and mutual respect for each other.

When Mandela was moved to Victor Verster Prison, talks about his release escalated. On his release, Mandela arranged for Christo to take up a job as an administrative and logistics manager in the Constitutional Assembly. Once the Constitution was adopted, Ahmed Kathrada organised for Christo to return to work on Robben Island – this time as supervisor in the island shop. Christo was back where he started his work career. But this time on an island freed of prisoners – a place of healing and reconciliation. A place of endless fascination to international tourists, historians, political activists and anyone with an interest in South Africa’s turbulent past.

Encouraged and supported by Nelson Mandela, in 2014 Christo wrote his book Doing Life with Mandela – My Prisoner, My Friend, with co-author Barbara Jones. 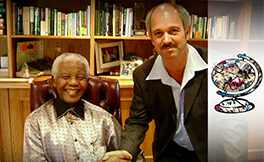