She has appeared in both national and international campaigns, fashion weeks and editorials from Collectible DRY, WAD, ID Magazine, Dazed & Confused, Oyster, Paper Cut, New York Magazine, to Vogue, Italian Vogue, Bahrain Confidential, Tatler, Harpers Bazaar and many more. Walking for designers including Mulberry, Alexander McQueen, Christopher Kane, and Harris Tweed. After the success of her BBC Radio show ‘Music Match’ she went on to star in and produce the UK’s first ever award winning podcast dedicated to women of colour on BBC Radio 5 Live called the ‘Sista Collective’. Interviewing world heavyweights in film, fashion and television including Amma Asante. She has toured extensively as a disc jockey at festivals and gala’s from Gotha, Websterhall, Lovebox, Glastonbury, opening for music legends such as Grace Jones.

Much of her career has been spent fund raising for charities including Children’s Hospice Scotland, Climate Revolution, Fuel Poverty Action, The Well Foundation and The Columbus Hospice, as well as working with big brands including TOMS, The Body Shop & Vivienne Westwood. She is currently the Ambassador for FAD, Best Beginnings, Graduate Fashion Week, AAI, Zero Waste Scotland and Fashion Targets, joining the ranks of Kate Moss, Edith Bowman, Twiggy, Alan Carr and Sharon and Kelly Osborne. A passionate activist and campaigner she has worked with the Centre for Social Justice and spoken at the House of Parliament influencing the first ever inquiry into the impact of fast fashion on the environment. In 2019 she created ‘Next Generation Regeneration’ curating exhibitions, talks and events at Tate Modern and The V & A, becoming the first ever Scottish Model to produce an on-schedule BFC London Fashion Week catwalk show.

The event took place at Lambeth Town Hall and included a full programme of presentations and Q & A sessions including Nish Kumar, Afuah Hirsch, Dennis Alcapone and Jamelia, to call into account the UK Government and highlight the Windrush Scandal. In November 2020 she worked with Simon Fredricks on the ground breaking documentary on the life of Stephen Lawrence and founded the ADBSF Fund primarily focused on supporting Afro-Caribbean businesses in a daunting Coivd-19 climate. She is quoted as a ‘philanthropist’ running youth groups and classes throughout the UK.

In 2018 she released her best selling book ‘How To Get into Fashion’ which highlights her work in preventing exploitation, sustainability and diversity in the Fashion industry. In August 2019 she was selected to be part of the world’s most prestigious and longest running authors event, the Edinburgh International Book Festival. In October 2020 she contributed to the ‘Loud Black Girls Anthology’ edited by Booker Prize Winner Bernardine Evaristo. This Brit Supermodel, has grown as a talented producer, broadcasted and actress with a sell out show at The Stand during the Edinburgh Fringe, the Apollo NYC and five star review for her solo production Metamorph at The Traverse Theatre. Over the last few years she has secured multiple lead roles including BAFTA Award winning Trouble Sleeping, BAFTA nominate Middleman, comedy After Louise alongside award winning actor Greg Wise, One Sweet Oblivious Antidote with Lenny Henry, with further cameo appearances in Ab Fab The Movie, Starwars Rogue One and The Last Jedi .

In 2021 she landed a major role with urban music mogul ‘Stormzy’ in Malorie Blackmans ‘Nought & Crosses’.  She is also a regular contributor on BBC, GMB, Lorraine and SKY TV as well as a celebrated public speaker, hosting a variety of events from MOBO Awards, MTV, London Fashion Week to Cannes Film Festival.

Curator supermodel Eunice Olumide has selected some of the UK’s most pioneering talent to bring a distinctive and unique element to The Olumide Gallery collection. The outcome is an intriguing and insightful exploration of the reality of life, the street and subculture; seen through the eyes of their creators that straddle both past and present. The gallery launched at The Groucho Club Soho in London. Artists include Richard Wilson (Slip Stream, Heathrow Airport for The Queen), Nick Walker, The Conner Brothers, Robbi Walters, and various other significant Blue-Chip Artists. With exhibitions alongside powerhouse Vivienne Westwood in aid of Fuel Poverty Action; dealing with socio-economic issues through inspiring prints, paintings and neon. In March 2019 Olumide Galleries produced a major public exhibition hosted by Schroder’s Investment Bank in aid of Pancreatic Cancer UK. In October 2020 she signed esteem African Artist Oliver Enwonwu who holds his fathers Ben Enwonwu archive. In 2020 his work broke the world record for the highest sale of African art 1.2million at Bonhams. Eunice explains: “The Olumide Gallery represents the most innovative and cutting edge talent of our time – at the heart of our work is equality and revolution. Visitors to the gallery will see the real stories about real life through the eyes of the artists” www.olumidegallerylondon.com

In November 2017 Eunice Olumide was awarded an MBE as part of the Queens Honours for services to Broadcasting, Charity and Arts. Other MBE Awards go to Ed Sheeran and Erin O’Connor. In 2018 she obtained the prestigious title of V & A Design Champion for her incredible contribution towards Design and Production. A permanent gallery has been installed at the National Museum of Scotland on her life and work to date. 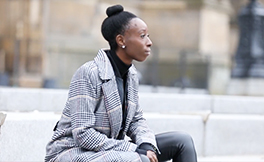 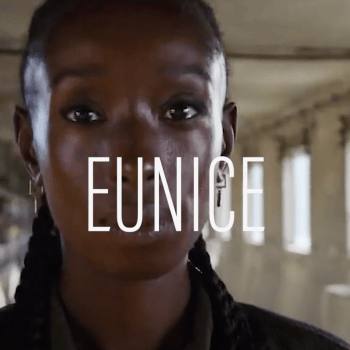 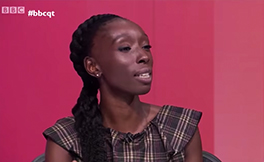