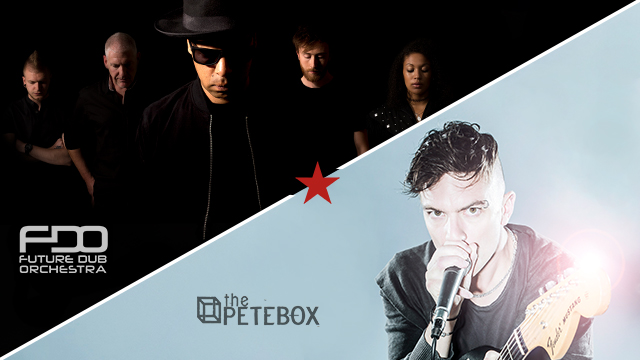 THePETEBOX is a solo performer, musician, songwriter and multi-instrumentalist whose pioneering live show has ignited audiences across the world. Breaking out as an award-winning beatboxer he soon redefined the genre through the use of his loop pedal, guitar and an otherworldly, multi-phonic voicebox. THePETEBOX’s debut album ‘Future Loops’, a ‘live, studio, video’ album comprising of original tracks and reworks of his favourite songs has reached over 30 million views on his YouTube channel. THePETEBOX’s versatility is reflected in the variety of settings he has performed in, from clubnights world-wide to multiple Grand Prix, the major stages at festivals, Glastonbury, Reading/Leeds, V-Fest, Bestival UK – Lake of Stars, Malawi – Woodstock, Poland to name but a few, private parties for the stars and sold out headline tours around the UK, Europe and USA.

With a packed tour schedule and midway through a sophomore album of entirely original material THePETEBOX will continue to reach and transform the sonic horizons of people across the globe.

The musical talent that is the work of songwriter, producer and Musician J.T. Clarke.

The Sound is part of the DNA of the collective, according to J.T, who traces his passion for music back to first hearing the Reggae and Dub sound systems of the St Paul’s Carnival in his youth.

Sneaking into the now legendary club the Dug-Out at a very young age, listening to Bristol Music Pioneers Wild Bunch, Smith & Mighty, & many more talented Bristol musicians, was a significant influence, along with the emergence of Hip Hop fresh from the Bronx, & music ranging from Kraftwerk to Roy Ayers, funk & soul & a record collection of American & European Imports.

J.T. cut his musical teeth during an apprenticeship with the now-legendary Coach House Studios in Clifton, the same studio that gave us bands such as Massive Attack, Tricky and Portishead.

Future Dub Orchestra is committed to pushing the musical boundaries to take the music into new directions, and cites influences as diverse as Electronica, Dub, D&B Reggae, and Film Music. From the outset the ethos has been that the music should form the center around which a creative collective could grow.

Future Dub Orchestra is a collective of musicians working under the guidance of J.T. Clarke. Their stage setup varies from a four-piece band, right up to a full orchestra with all the variables in between. Over the years a large number of talented musicians have come to work with the Future Dub Orchestra adding their talent to the collective. The result is an evolutionary, but truly shared process that continues through all the stages of composition – lyrics, instrumentation, backing vocals, right up to and including live performance.

The first time you play something live, with that buzz and energy, it’s like hearing it for the first time, and you can always learn from that.

Future Dub Orchestra have been creating and honing their atmospheric sound at festivals, clubs, across the UK & Europe including touring.
Future Dub Orchestra’s unique sound is the result of an evolutionary, but truly shared, process that continues through all the stages of composition – lyrics, instrumentation,  & vocals, right up to and including live performance that have seen them perform on main stages throughout the UK & Europe.