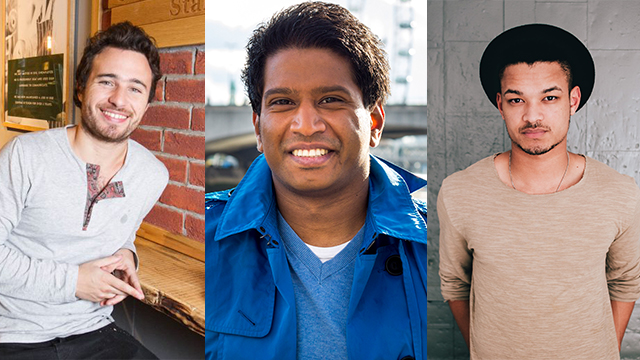 Steve spoke on topics such as: Social Media, Consumer Trends, Innovation, Disruptive Leadership, Branding, How To Break The Internet.

Josh is one of the UK’s leading, youngest and most in-demand social entrepreneurs.

He is the co-founder of Social Bite, an innovative social enterprise in Scotland with a mission to eradicate homelessness in the country. To-date he has raised over £7 million for charity.

Social Bite, which began as a small chain of sandwich shops, donate 100% of their profits to good causes and 1 in 4 of their staff are from a homeless background. Last month they endured a media frenzy with the visit of Prince Harry and Meghan Markle. No strangers to VIP visitors, they have previously welcomed Hollywood superstars George Clooney and Leonardo Di Caprio, who alongside the likes of President Bill Clinton and Sir Richard Branson have given their approval and support to Josh’s social endeavours in battling homelessness.

A prominent speaker on leadership, trust and a need for social good in business, Josh continued putting his words into actions in 2017, raising more than £4M to help eradicate homelessness in Scotland, by organising the world’s biggest sleep-out event Sleep In The Park. Over 8,000 people slept out on a cold winters night and Sir Bob Geldof, John Cleese and Liam Gallagher were just a few of the star names involved. In the same year he was named on the Debrett’s list of 500 most influential people in the UK.

Josh is currently planning the launch of his brainchild, The Social Bite Village, in support of some of Edinburgh’s most vulnerable homeless people. An initiative supported by Edinburgh council who have loaned them the 1.5-acre vacant land.

Steve is the irrepressible 24-year-old Founder and CEO of Europe’s fastest growing marketing agency, Social Chain. An agency boasting a portfolio of social communities with a following in excess of 386 million – more than the entire population of the U.S.A.

Rewind to 18, Steve had just dropped out of university and launched his first company, Wallpark, a venture which defied conventional marketing paths and sought to utilise social media. Steve, having become fascinated in disrupting traditional marketing methods, took a risk, he quit Wallpark and with a new focus, set out to create the most innovative social media marketing agency of the decade, Social Chain was born.

Steve rounded up the most talented people in social media, acquiring a host of renowned online communities with huge followings, including ‘Fitness Motivation’ (2million) and ‘Love Food’ (7million). Social Chain, with Steve at the helm quickly became the focus of the biggest international brands with the likes of McDonalds, Puma, Fox, Universal, Amazon and the BBC eager to access their reach and expertise. If a major company is looking to discover the next trend or wanting to ‘break the internet’ in 2018 – it’s highly likely Steve and Social Chain will be the taking the call very soon.

Steve’s own online following is huge and his passion and ability to relate to and inspire this predominantly millennial audience is paramount to his success today.