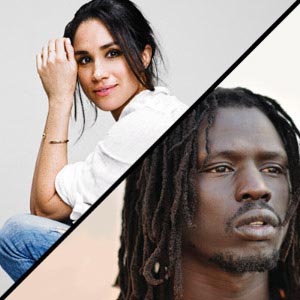 Our series of monthly breakfast briefings are kicking off once again in March. We invite you to a morning of breakfast, networking and thought provoking discussion from some of the industry’s most influential speakers. Our first Soho House event, celebrating International Women’s Day takes place on Monday 9th March and features…

An actress, entrepreneur and humanitarian, Markle is best known for her role as paralegal Rachel Zane in US legal drama ‘Suits’. Alongside her acting career, she runs the acclaimed lifestyle brand and website, The Tig, specialising in fashion, food and travel. Markle is also an active ambassador for UN Women and has participated in a number of social projects around the world.

Emmanuel Jal is a performing artist, actor and author from South Sudan. A former child soldier, today he is a renowned political activist and peace ambassador. He released his 5th studio album The Key in September 2014 and is currently starring with Reese Witherspoon in the Warner Brothers film The Good Lie, which will be released in the UK on April 10th.