As one of the most iconic supermodels of the last fifteen years, Natalia has walked hundreds of runway shows and starred in some of the most famous campaigns for top luxury and fashion brands. She has graced the covers of hundreds of magazines and has been the face of Guerlain, Yves Saint Laurent, Louis Vuitton, L’Oreal, Chanel and Calvin Klein.

At only 36 years old, Natalia has a long list of impressive achievements under her belt, which span far beyond modelling. She is a board member of the Special Olympics and an ambassador for the FIFA World Cup 2018 in Russia. Natalia was involved the tournaments opening and closing ceremonies, leading out the trophy on both occasions. Her philanthropic vision has been delivered in her wonderfully warm and calm manner, to many prestigious events, including the Clinton Global Initiative, Global Citizen, First Ladies’ Luncheon, Web Summit, Founders Forum, Millennial Summit, and One Young World.

Beyond modelling and motherhood, Natalia has established herself as a truly inspiring and active heroine of philanthropy: her charity organisation, the Naked Heart Foundation, aims to ensure no child with living parents ends up in an orphanage or a children’s home. For the last 14 years the foundation has been tackling the stigma surrounding disability, to remove any pressure parents might feel to give up a disabled child. With great determination and passion, she strives to guarantee that every child has a loving family and a stimulating place to play.

With the launch of her digital app Elbi, she made philanthropy part of daily life: empowering others to fundraise for charitable purposes, all the while spreading the philosophy that every little act of love counts.

Through empathy, hard work and an aspiration to justice and inclusivity for people with special needs, Natalia is seen as one of the most inspiring women of our time.

Genuine, earnest and utterly real, there is perhaps no better example of what consciousness can mean in the world of fashion than Natalia Vodianova. 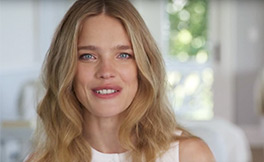 “I always say that all women are strong. But here is no one who is as strong as Natalia. No one. She is the strongest woman I know. She can do it all”

“Her work comes from the heart, She’s absolutely relentless in the effort that she’s willing to put in.”

“What’s special about Natalia isn’t the scale or the swiftness of her success; it’s the incredible things she’s done with her success.”

“Natalia Vodianova’s Elbi is a wonderful journey of self-discovery. It's about connecting, helping others and feeling good about making a difference.”