SPEAKER OF THE MONTH – Fatima Bhutto

In the first of a new monthly feature showcasing Kruger Cowne’s vast array of influential speakers, we take a look at an exceptionally inspiring woman who enthrals her audience, delivering her knowledgeable viewpoint on a variety of subjects with grace and ease –  Fatima Bhutto

Fatima was born into the most prominent political family of Pakistan. Raised in Syria and Karachi, her early life was fraught with drama and tragedy, her family paying a high price for their involvement in the unstable political system as family members including her father, Murtaza, and aunt, Benazir, lost their lives amidst the violence and turbulence that arose from a country in a state of crisis. 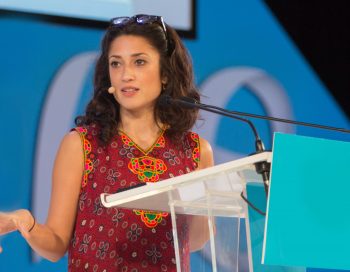 Instead of following her family into politics, Fatima drew on her experiences and chose to speak out in voice and print about the corruption and military misrule she had witnessed. She emphasises the importance of proper leadership, especially by women, and relays her hopes of a better future for Pakistan, a country which clearly holds a very special place in her heart. In doing so, she has quickly grown to become recognised as a prominent, highly accomplished speaker and critically acclaimed writer, garnering a huge following on social media and beyond, from a public appreciating her honesty and compassion.

When speaking, Fatima delivers her dialogue assertively with the natural confidence and charisma of someone born to influence others. The subject of her speeches range from the role of violence in politics to press freedom, the Middle East and South Asia, female leadership and propaganda. Whilst these subjects may appear weighty, her philosophical attitude mixed with fascinating anecdotes and humour gives Fatima the ability to effortlessly build a strong rapport with her audience.

Fatima’s speaking abilities are highly adaptive to audience needs, as can be seen by the diverse range of previous speaking engagements, which have included Airbnb, Merrill Lynch, Swedbank, Escada, Louis Vuitton, Roger Vivier, One Young World, Marka and India Today.

With meticulous planning, faultless delivery and a humble demeanor, Fatima will leave a lasting impression on any delegate, at any event. If you don’t believe us, take a look for yourself…

Bhutto’s recent speech for The Power of Film

What our clients say:

“Fatima eloquently delivered insights to her

world.  She was mesmerising… We were honoured

to have her speak to our delegation…”

“The speech was utterly superb.

A moving look at Film and Propaganda that was

– The Power of Film

Share this post on
previous: A healthy start to the New Year's first Breakfast Club next: Sir Bob Geldof Honoured with Prestigious Thomas Kettle Award by UCD
Your Shortlist