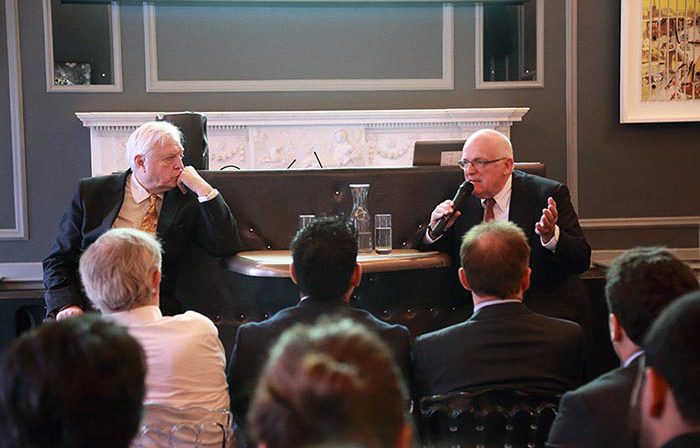 With almost 50 years in the industry, John Simpson CBE is celebrated as one of the greatest journalists of our time, devoted to sharing groundbreaking and hard-hitting news.

John is recognised as the most senior news correspondent for the BBC, covering some of the globe’s most defining moments in modern history. He has reported from 140 countries and has interviewed some of the world’s most notable names such as Colonel Gaddafi, Bashir al-Assad, Nelson Mandela, and Robert Mugabe.

Sir Richard Dearlove was the Chief of the Secret Intelligence Service, MI6, from 1999 to 2004. With a career spanning over 38 years in British Intelligence, Sir Richard’s time as Chief of MI6 was marked by dramatic events and global instability, including the invasions of Iraq and Afghanistan, the crisis of 9/11 and a terrorist attack on the SIS headquarters.

The audience was treated to a unique insight into both the overt and covert realities of modern conflict. As aptly put by the former Chief of MI6, “These are rather sensitive issues…there are no discreet questions but there are discreet answers.”

From the role technology plays in the intelligence services to the influence of the dynamic, political relationships that exist between nations, the duo delved deep into the threats the modern world faces and what the UK’s standing on terror is. As one of our guests puts it, “the discussion was both formidable and galvanising, and it left me beholden to such superior minds and exceptional careers..”